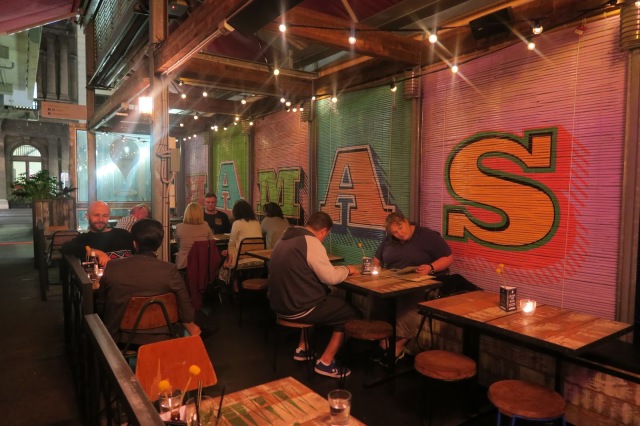 I must’ve walked past Mama’s Buoi a million times, considering how often I visit H&M, and Mama’s Buoi is tucked away right next to GPO, but it’s pretty hard to spot, since that alley way isn’t used a whole lot.

My friend’s friend made a recommendation about the restaurant though, and that’s how we ended up here for dinner one night.

I’m pretty sure it was a Friday night, let’s just pretend it’s Friday, so I can justify these drinks. Forever a fan for the sweeter things in life, I went for the strawberry waterslide, otherwise known as Miss Saigon. Throw some gin, mint and lemon into the mix, and the result was a sweet yet refreshing drink, which I sipped on happily while we waited for the food.

The waiter described Pho Cocktail as having the exact same herbs and spices that are put into a pho stock, but in the form of a drink. It sounded like something neither of us has tried before, and for experiment’s sake, we ordered it. The flavour was definitely a lot more complex than Miss Saigon, with the house made syrup, which is infused with star anise, mint and basil. The waiter helpfully brought over some sugar syrup when my friend mentioned it being too herb-y, which was rather kind of him.

First to arrive was the Bánh Cuốn, which was essentially some rice noodle, filled with diced mushrooms and mince. It was similar to something that my mum buys from the Chinese grocery shop. Although the flavours all worked well together, it was nothing ground breaking.

And of course we got the fried chicken ribs. Mama’s Buoi put their own twist on it by seasoning it with five-spice, and drizzling some chilli-lime glaze over the top. The batter was kind of similar to KFC, being super thick and crunchy, which I personally love.

Soft shell crab is still a thing, which means we still get them whenever they’re on the menu. This was a bit disappointing though. The salad was very refreshing and Vietnamese-y, if you know what I mean, with pieces of grapefruit thrown in, which I loved. But there were only three pieces of soft shell crab?! Even though we’re all used to Melbourne serving sizes by now, it was still a let down.

The smoky eggplant were a hit though, the eggplant did indeed, taste very smoky. and the sticky and sweet sauce meant we were fighting for the last piece.

After all that, we were still hungry, and since we were eyeing the skewers on the table next to us, we thought, well, why not treat yo self? Which is precisely how we ended up with these mixed skewers. The pork was our favourite, being perfectly chargrilled. The beef was a little dry though. Regardless, the skewers were fun to eat when you wrap it all up with the lettuce leaves.

The service at Mama’s Buoi was amazing, the waiter was very friendly, and he knew the menu very well. The dining experience at Mama’s Buoi had its ups and downs on the other hand, but we still had a pleasant time overall.

How to get there:
Mama’s Buoi is located at the Ground Floor of GPO, which is on the corner of Bourke Street and Swanston Street, a couple of blocks away from both Flinders Street and Melbourne Central.